The Philadelphia Convention and Visitor’s Bureau (PHLCVB) is a nonprofit membership organization and the official tourism promotion agency for the City of Philadelphia globally. Established in 1941, PHLCVB also serves as the primary sales and marketing agency for the Pennsylvania Convention Center. PHLCVB reached out to Creative Repute’s team to curate an inclusive photoshoot.

Known to some as their DiscoverPHL social media handle, PHLCVB has gathered a significant online presence by actively promoting new and classic Philadelphia destination spots. They’ve also done incredible campaigning for important events, such as the 2017 NFL Draft, Pope Francis’ historic visit to Philly for the World Meeting of Families, and the bid for Philadelphia to host the 2026 FIFA World Cup.

Through their efforts to bring major meetings, conventions, and overseas tourism to Philadelphia, PHLCVB is actively creating jobs and fueling the economy. They are advocates for Philadelphia and the city’s continuous transformation and growth of human capital. The organization is openly passionate about the City of Philadelphia, and that passion spills over into its care for clients and visitors.

Outside of Convention sales and services, PHLVB positions Philadelphia and the region through its innovative advertising, marketing, public relations, and digital campaigns. They also recruit and service PHLCVB members, and they bring the hospitality industry together through networking events and seminars. PHLCVB raises the visibility of the tri-state region as a world-class destination for life sciences meetings, conventions, and business. The bureau works to attract and support conventions and tourism that ensure the multicultural community is an integral part of the Greater Philadelphia community.

PHLCVB was one of the first CVBs in the US to establish a division highlighting their city as a diverse, equitable, and inclusive location for meetings, events, conventions, and visitors. PHLCVB connects with businesses, suppliers, and community leaders who share their values and goals and can help facilitate community engagement.

PHLCVB wanted to own a series of archival photos that truly captured the spirit and diversity of Philadelphia. The organization has access to hundreds of pictures in its archives. However, the media team felt the current stock of photos needed more inclusion, particularly the lack of LGBTQIA+ representation. Philadelphia has a rich history of queer culture, and it was important that history gets captured and included in the photoshoot for PHLCVB’s upcoming marketing materials.

PHLCVB reached out to Creative Repute to provide a broad collection of stock photos from a photoshoot that the media team can use in upcoming events, press releases, advertising, and whenever authentic lifestyle photos are needed on the official Discover Philadelphia website. The team assigned to this project needed to be comfortable with PHLCVB owning exclusive rights to the work for seven years. The goal was to freshen up the client’s photography with imagery that captured Philly’s evolving demographic.

The Approach to the Photoshoot

After the first meeting with the PHLCVB team, our team saw the need to show not just representation of Philadelphia’s queer community but also a wide range of ethnicities, genders, and ages.

The key elements of the photoshoot that needed to be highlighted were transformative, inclusive, and authentic. The Creative Repute team wanted to ensure the photos exhibited a clear understanding of the people who call Philadelphia their home.

The Creative Repute team contacted local artists and influencers to participate in this project, including Art Director Marisa Velazquez-Rivas and Photographer Elijah Sanchez. Both were excited to join the project and began pre-production. On the Creative Repute team, Sandra served as the Account Manager, and our in-house Art Director, Sadie, joined the project to coordinate with the models and provide art direction for the shooting days.

For pre-production, Sandra, our Founder, Nile, and Nahid, our Project Management Officer, worked with Marisa to create a creative strategy presentation deck. The deck’s goal was to demonstrate our approach to the project, solidify project objectives, determine the shoot’s tone and feel, suggest models, and finalize shot-list specifications. Next, Nahid and Sandra worked with the Creative Repute internal team to break down the project’s budget and determine the costs for each deliverable to guarantee the project remained within the client’s budget. Once we received approval from the client that we were moving in the right direction, the next step was to scout and hire models.

We utilized the Creative Repute Social Media department to create a brief online campaign for the model search. We utilized our online presence and published a series of Instagram reels and posts inquiring about individuals and couples who would like to participate in the photoshoot. We also used our well of local Philadephia connections to find willing participants for the photoshoot. In the end, we selected fifteen models.

With the participant list solidified, Sandra drafted model release forms for each participant, with clear directions of what was expected of each model for the day of the shoot. Sandra communicated with each model to confirm their availabilities for the scheduled shooting days. From there, she divided the participants into a Day One crew and a Day Two crew and ensured each model knew which day they were expected on set. Leading up to the two consecutive shooting days, Sandra and Sadie met with each model during a virtual meet-up with the participants and the Creative Repute team. During this meeting, Sandra led the discussion on what to expect during the shooting days, and what neighborhoods we would be traveling to and answered any follow questions the models had.

Once the models were all introduced to the team, Sandra and Sadie coordinated with each model on two looks (a day look and an evening look) that they would bring to the set. The models sent photos of their suggested outfits, and Sadie briefed Sandra on what looks felt appropriate to the theme of the photoshoot. Although the shooting occurred in late August, it was important that the models wore “evergreen” outfits and strayed away from apparel that clearly belonged to one specific season.

We wanted to focus on iconic Philadelphia landmarks in selecting locations for this photoshoot. Each site was a spot that was undeniably “Philly”. Those locations included The Liberty Bell, Independence Hall, The Ben Franklin Parkway, Love Park, local boutique Philadelphia Independents, and the vibrant bar Tattooed Mom. Seeing that we had an eclectic LGBTQ group amongst our models, it was essential to shoot in Philly’s historic Gayborhood 13th and Locust intersection, as well as the oldest LGBTQ bookstore in the country, Giovanni’s Room.

To further prepare for the photo shoot, Sandra connected with representatives from each location to confirm we had the approval to shoot in their spaces. She coordinated with the manager of Philadelphia Independents, the social media representative from Tattooed Mom, the Public Affairs Officer of the Independence National Historic Park, and the owners of Giovanni’s room to secure their written approval for the selected shooting days. Sandra coordinated with the scheduled staff of each location and provided written proof to staff before the team began setting up at each location.

This led to two successful shooting days with the selected models that took place on a weekend in late August 2022. Sandra, Sadie, and Nile were available for the entirety of each shooting day. Elijah shot fantastic images in iconic locations around the city with an array of diverse collaborators that represent the local community. Sandra corresponded with Sadie and Elijah throughout the shoot to ensure that we remained on schedule and got the necessary shots that the client requested.

We wanted to ensure the models felt heard and accommodated throughout the photo shoot. To do so, Sandra provided refreshments to the models throughout the five-hour shooting days and took breaks for a late lunch. Two large vehicles were rented to provide transportation between locations so the models could stay together.

Once the shoot was complete, Elijah immediately sent the raw photos to the PHLCVB team to begin selecting which pictures they were drawn towards. After two rounds of feedback, PHLCVB ended up with over 50 edited images.

The Philadelphia Convention and Visitors Bureau (PHLCVB) creates a positive economic impact across the Philadelphia region, driving job growth and promoting the health and vibrancy of our hospitality industry by marketing the destination, the Pennsylvania Convention Center, and attracting overnight visitors. Our work engages our local community and culturally and ethnically diverse regional, national and international conventions, sporting events, and tourism customers. 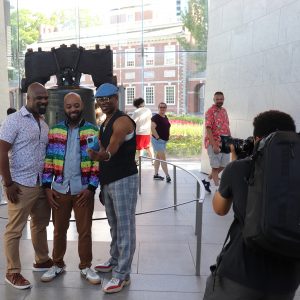 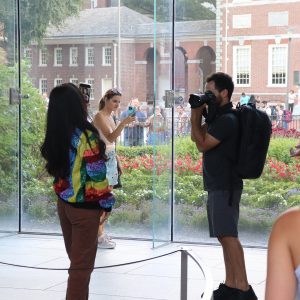 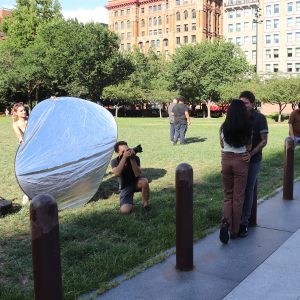 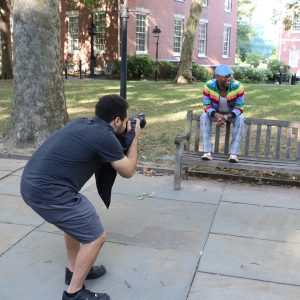 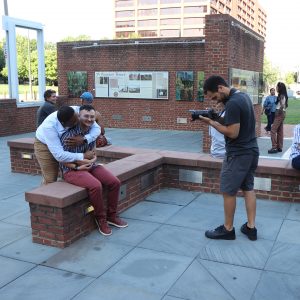 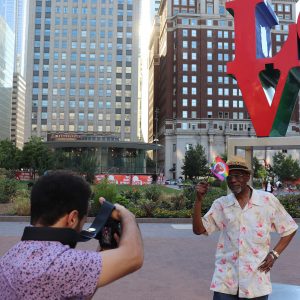