About the Album Artwork Project

The 21 Hats podcast is a space for entrepreneurs to share their business journeys. Each episode features a weekly roundtable conversation among business owners who share their challenges and successes throughout their careers.

Feldman is a seasoned business journalist and has a background in hosting entrepreneurial-oriented talk shows. The podcast first aired in January 2020 as a response to the economic crisis, and it covered the uncertainty of the COVID-19 pandemic. The podcast was one way to intervene in this global catastrophe. Not only does the project help by giving business owners a space to share their hardships and compare notes on how they’ve coped through a wide range of obstacles and triumphs, but it’s also a great place to find tips for running profitable ventures and messages of hope in troubled times.

Since its inception, the 21 Hats Podcast has grown and garnered a loyal fanbase. Just as the podcast’s scope has evolved to respond to the ever-changing geopolitical landscape in the wake of COVID-19, the founder of 21 Hats decided so should the podcast’s branding. To continue to expand the 21 Hats mission and refine the visual identity of the podcast, Creative Repute was hired to redesign the podcast’s album artwork.

Our Approach to the Album Artwork

An initial, in-depth kickoff meeting is an integral aspect of Creative Repute’s design process. When first meeting with the client, we discussed the goals of the project, assessed the scope of the work, and laid out the expectations for the final product.

In the early brainstorming, the client clearly communicated the importance of the podcast’s core message. The impetus to change the album artwork was to shift the visual identity to better reflect the 21 Hats mission. The old artwork prominently featured the image of the founder and utilized a darker, black, and white aesthetic. The client made it clear that the new artwork should feel more hopeful and focus on the figure of the entrepreneur, rather than their individual experience of Loren.

The client emphasized the importance of the established listener base and how he did not want to confuse them with the refresh. In response, the Creative Repute design team prepared a style guide that kept key aspects of the 21 Hats brand. By maintaining several core elements such as color palette and font families, the redesign was intended to feel more like an expansion of the scope of the brand rather than a wholly new podcast.

The client’s openness to suggestions allowed the design team to start with a practically blank slate for the podcast’s cover artwork. Once the style guide was established, our team got to work producing several motifs for the album artwork. In the course of a week, we shared out multiple rough illustrations as potential visual avenues.

Collaborative brainstorming sessions between the client and our design team were imperative in establishing the most appropriate next steps. In one meeting with the client to review the initial round of production, it became clear that the most important elements to be included were the figure of the entrepreneur and the hats they wear. The name 21 Hats comes from the phrase “wearing many hats,” to suggest that entrepreneurs are multi-skilled multitaskers, ready to take on almost any role the situation demands.

Furthermore, a huge reason for the redesign was to call in a more diverse listenership. In centering a more generic figure of the entrepreneur where any personal identifiers were indistinguishable, the client hoped that businesspeople of all backgrounds would see themselves in the figure on the cover and feel at home in the 21 Hats community.

As Creative Repute offered new iterations featuring these key elements, the team maintained close communication with the client to narrow in on the most effective version of the cover. From discussing the overall tone to tweaking the font size of the title, the Creative Repute team ensured every design choice was 100% in line with the client’s vision and that the deliverables passed accessibility tests, such as contrast checkers.

In collaboration with the client, the Creative Repute team narrowed in on a more specific image. The final cover featured a non-descript figure wearing several multicolor hats of various professions. A baker’s toque, an artist’s beret, an academic’s graduation cap, and an entrepreneur’s top hat, the businessperson happily wears multiple hats in their pathway to success. This vivid approach radiates positivity and gives a playful wink to those who are in the know of what it means to wear 21 hats.

Once the last adjustments were finalized, the album artwork was ready for roll-out. Upon seeing the new cover, many stakeholders, such as podcast regulars and LinkedIn professional networks were delighted with the end product. As members of a small business and big fans of the podcast, the Creative Repute team is proud to have worked on a project that will help expand the 21 Hats community.

In addition to the podcast, the 21 Hats platform publishes a daily newsletter about important business topics as well as frequent webinars that introduce business owners to new voices and concepts. The aim of 21 Hats is not to act as a unilateral guide on how to have a lucrative venture, but rather to offer a diverse array of voices on what it takes to run a business, based on real-life experiences. Above all else, 21 Hats exists as a supportive community where business wonders can educate, empower, and elevate each other. 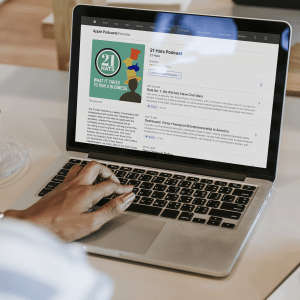 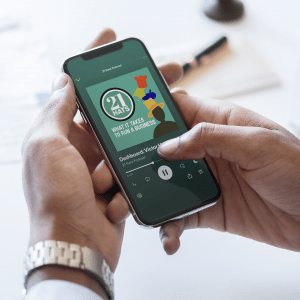 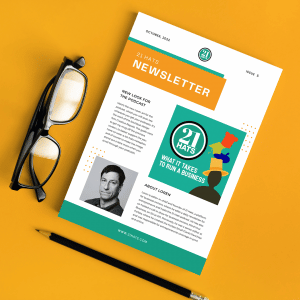