PHILADELPHIA250 (PHL250) is an independent nonprofit organization formed to create a people-driven movement for the 250th anniversary of the signing of the Declaration of Independence in 2026. Through educational and community engagement efforts, PHL250 aims to create the most inclusive and transformational anniversary in the US’s history. The organization’s initiatives are rooted in contemporary applications of four values from the Declaration of Independence – revolutionary actions, the pursuit of happiness, people’s histories, and shared prosperity. Creative Repute was hired to design conversational cards and it’s package, which includes formatting instructions and typesetting the zine.

One important project in PHL250’s mission is to create a deck of conversational cards related to the four Declaration values. The questions printed on the cards are meant to generate discussion about what the themes and ideas of the Declaration of Independence mean to us today, 250 years after this founding document was first written. PHL250 paired with five Philadelphia-based artists; one to make a zine instruction guide and four others to produce the artwork featured on the back of the conversation cards.

The final component was putting all of the visual and textual elements together to bring this vision to life. Creative Repute was hired to design the cards, format the instructions, and design a package that boxes the cards, typeset the zine, and create eye-catching packaging. In the current political climate, a time of simultaneous unrest and apathy, PHL250’s goal is urgent; a commemoration that is truly by the people, for all people will be an important milestone in Philadelphia and the nation at large. An engaging, accessible design was a critical element in getting people excited about PHL250’s important work. The end product intends to not only invite users to consider the lasting relevance of the Declaration, but also inspire them to stand up and take bold action in their community so that everyone can fully realize their rights to Life, Liberty, and the Pursuit of Happiness. 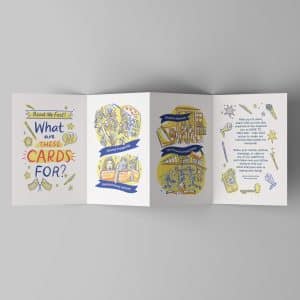 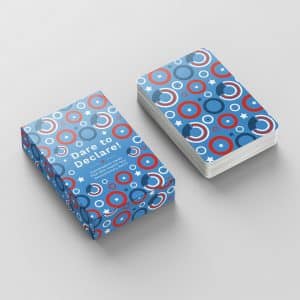 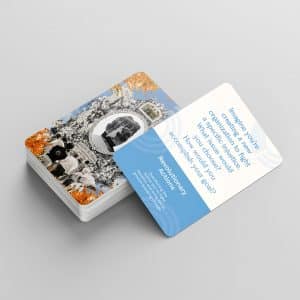 Creative Repute always starts with an in-depth discovery process to clarify the client’s goals, zero in on design preferences, and establish parameters of the deliverables. From the onset, the client expressed the deck’s purpose was to educate players to see the Declaration of Independence’s connection to contemporary political struggles and offer some guidance as they navigate the civic engagement process. They also touched on the challenge of streamlining the multiple aesthetic elements into a unified end product. Creative Repute recognized that the design’s tone needed to match these goals– the cards should look modern, accessible, and exciting. It was immediately clear that color and font were crucial aspects to clearly brand this as a PHL250-specific initiative.

The design team generated a style guide that built upon many of the existing elements of the PHL250 brand but also pushed them to better cohere with the artists’ works. One concrete way we accomplished this was with color; while the design team used a variety of reds and blues within PHL250’s existing style guide, we deliberately focused on colors that weren’t the typical American flag colors. By intentionally subverting these tropes, the design team was able to build an aesthetic that aligns with PHL250’s mission: intentionally interrogating and modernizing the foundations of the US to build something new and beautiful.

With the client’s approval of the style guide, our team got to work producing the many components of the deck. The designers provided several rounds of mockups, each featuring a unique color and font combination. During each iteration, the client and the design team continued to zero in on the most effective base layout. The final version featured the same design in four different suit colors, to match each Declaration value.

The final element left to create was the tuck box. From the beginning, the designers wanted to incorporate the PHL250 logo. They enjoyed building a new organic, playful pattern from the original design. The final design looks intriguing and lively; the colorful geometric elements encourage engagement and leave viewers thinking, “I want to get their hands on that deck!”

Communication is foundational in any CR project; we believe that success is contingent on communication tailored to the client’s needs. In this collaboration, we kept PHL250 up to date each step of the way. From sending daily email updates, to creating a detailed calendar of the project’s lifespan, we ensured the project would stay on track to meet a tight turnaround deadline. CR further optimized the process by liaising with the printer on the client’s behalf.

Creative Repute successfully sent an impressive final product(conversational cards and package design) to print: a deck of 56 cards and an 8-panel zine encased in a striking tuck box. The deck will be used in several community events in anticipation of the sesquicentennial, and also be sold in multiple locations. As a company deeply invested in the continual economic and social empowerment of Philadelphia, Creative Repute is proud to work with PHL250 in its mission toward equity.

PHL250 wants to lead and inspire Philadelphia’s celebration of the 250th anniversary of independence in 2026. “By the People, For ALL People” is more than just the PHL250 tagline, it’s their focused approach. By the people means they are designing 250th activities with a bottom-up approach in which we listen to the people. Together, they will create exciting and meaningful events and activities in all the neighborhoods of Philadelphia where people work and play. For all people means everyone is invited and that the impact of our 250th activities matters to the future of Philadelphia and the US at large.

A key element of this project was to highlight the artists who contributed to the deck. Without their work and guidance, this endeavor would’ve been impossible. We want to shout out Cindy Lozito, who created a vibrant zine to accompany the cards. Additionally, the four artists created the card backs to represent PHL250’s values. Their final products were not only visually stunning but also jampacked with political meaning. Below, we wanted to highlight the artists’ ideas behind the work in their own words:

“This illustration depicts a community brimming with vitality and wellness: with housing, food, knowledge, ideas and love. It extends the idea of prosperity beyond money into something everyone can participate in.”

“Imagine people telling stories. Sometimes there are bits and pieces missing, and sometimes the stories are not linear. I am trying to capture that feeling, and suggest the circularity of time.”

“I chose to highlight African-American activist Caroline Le Count. Le Count was defiantly riding street cars decades before Rosa Parks refused to move her seat. The crowd gazes at her, encouraging the viewer to follow her example of revolutionary action.”

Elaine Knox, The Pursuit of Happiness:

“My illustration explores the ability to grow with happiness and not be restricted by life’s difficulties. It depicts a person’s potential through a flourishing burst of life and energy that defies containment.”